Ship-2-Shore Wet Films are made for a wide number of industries including agriculture and food processing factories, equipment. See the following testimonials proving high performance long lasting protection from moisture and corrosive contaminants and protection from rust. 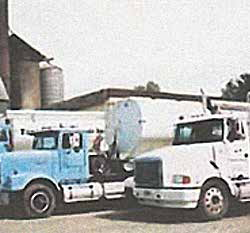 "We are feed manufacturer's on Vancouver Island, B.C. Our fleet of trucks deliver animal feed from Victoria to Courtenay on a daily basis. We first became involved with Ship to Shore in 1987. Our fleet of trucks were subject to rust and corrosion due to road salt and the feed products themselves. Ship to Shore has improved these problems with remarkable success. We recently sold a 1987 Ford LTS 8000 that had been treated annually since new. There was no deterioration on any of the body parts. This helped to realize a higher sale price.

Ship to Shore also helps the maintenance side of things because they are easier to disassemble. There is no rust or corrosion to deal with. We recommend an annual application of Ship to Shore on any vehicle, whether it be a commercial vehicle or your personal mode of transportation."

Since they started spraying the boards with PLID before putting them in service the problem has been virtually eliminated. One dollar invested returns $3,000 on saved computer boards.