"For the past eighteen months we have been refurbishing out 1945 built steel tug Sea Champ. One of the first jobs we performed at the shipyard was to chip and de-scale the steering flats. We then painted a coat of Ship to Shore industrial onto the bare steel. After a few weeks the steel in this damp unventilated location appeared unchanged by moisture. No Rust. 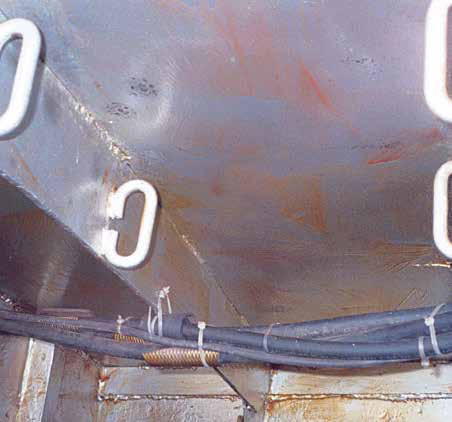 We were sufficiently encouraged to consider replacing the badly rusted deck and frames of the lazarette immediately forward of the steering flats. We did this with unprimed mild steel and when the job was done we painted it with one coat of aluminium paint and one coat of Ship to Shore. Whereas one coat of aluminium paint on bare steel will start bleeding rust within a couple of days, the aluminium painted steels in the lazarette today looks exactly as it did 6 months ago when the job was done. The predominant colour is silver, with a waxy pink tinge from the Ship to Shore. The surfaces constantly drip moisture in this unventilated part of the boat, yet there is no indication of rust anywhere.

The ability of Ship to Shore and PLID to neutralize the action of rust in difficult to paint and inaccessible areas present new possibilities for extending the life of steel vessels.

We are still working through our five gallon pail of Industrial, but we will need another case of the spray cans of PLID. We find more and more uses for this versatile product.

Addendum to this testimonial:
I spoke to Simon and he took a look in this compartment: He reported everything looks exactly like the day he did it in April 2004. No rust anywhere and lots of Ship-2-Shore present. 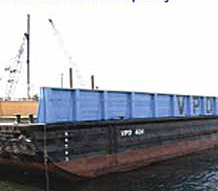 "We have been using Ship-2-Shore for several years on the interior of our barges and have found it to be an effective rust inhibitor. VPDL would like to thank LCC for introducing this product to our company".

"We have been using Ship-2-Shore for about four or five years now, and are very pleased with the results. We use it on the tugs and barges in all the void spaces. We also use it on the trucks and forklifts that go on the barges, on all exposed areas. There is no rust period on any of this equipment. If you need any further information, give us a call or email us." 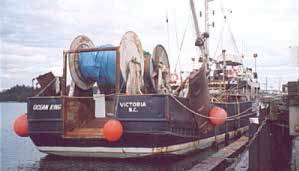 We received this note from one of the largest Tug and Barge companies on the BC coast who have been using the Ship-2-Shore rust inhibitors since 1998. I spoke to Paul and he says they "are using the PLID in aerosol on tugboat winch controls (bronze and brass) with excellent success. No more seized valves. Regarding preparation of steelwork before application of Ship to Shore. We basically needle gun all heavy scale/rust, coat the affected areas with a Rust Converter, allow for curing of Converter as per manufacturers recommendations, overcoat the Converter with a cheap (Grey) primer and then apply your product (Ship To Shore).

We have performed this application in the shaft tunnels, bilges (Engine Room & Aft Holds) and chain lockers on 3 vessels up to this date, "success rate is excellent".

"We have been using Ship-2-Shore for about four or five years now, and are very pleased with the results. We use it on the tugs and barges in all the void spaces... We also use it on the trucks and forklifts that go on the barges, on all exposed areas. There is no rust period on any of this equipment".

The Problem of Valves Oct 2002

We applied INDUSTRIAL to a couple of 966 loaders (including all the electrical connections) used on salt barges, and an excavator used to load potash.

Another use has surfaced: Ship-2-Shore for valves and piping in manholes that get flooded with water which contains salt and other corrosive substances, running off from city streets.

Here is an inexpensive and permanent cure to the problem of valves and hydraulic hose ends rusting when exposed to severe marine environments.

Apply Ship-2-Shore INDUSTRIAL to the valves. Wrap them with a clear plastic wrap and secure with nylon ties. You can see the valves, so monitoring is easy and the Ship- 2-Shore is enclosed, so it is permanent. You will experience no corrosion and you can still wash the area as often as necessary with no detrimental effect. It costs about $3.00 per valve and maybe 15 minutes of your time. This would also work for flange connections on large pipes on off-shore oil rigs.

This old lube oil barge below is now used to remove waste water (sewage) from aircraft carriers. Below is the hatch. (April 2000) 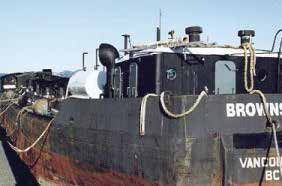 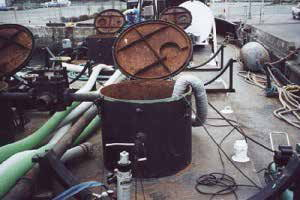 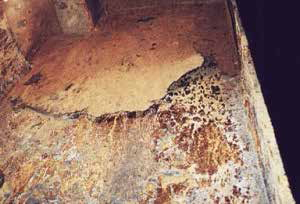 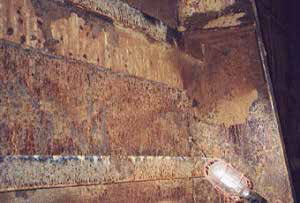 Preparation and Application Getting started above, we soon found that needle guns work much better than prospector's picks.

The Ship-2-Shore appears white while applying as the photo below shows, but it soon goes clear. 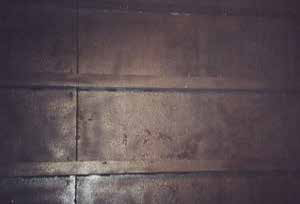 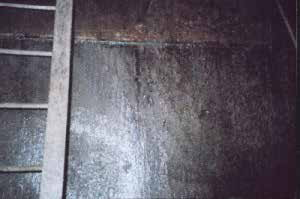 After Use
This area had been submerged in waste water for approximately four months, from August to the end of December 2002, when they finally got pumped out and hosed down. But now there is no rusting here, the Ship-2-Shore coating is 100% intact.

With the barge back in service, there was a layer of slime remaining after pumping and hosing out and as far as could be determined the Ship-2-Shore coating was totally intact as there was no sign of rusting. This photo shows the layer of slime coating most of the interior. I ran my finger through it in January 2003.

When this application was done the metal was damp, there were oxides on the surface of the metal. These rust marks are the result of Ship-2-Shore displacing this moisture, containing oxides, away from the metal. The moisture has evaporated off leaving the oxides behind. This is a good thing and a clearly demonstrates Ship-2-Shore's ability to displace moisture.

This photo shows that waste water sat in this compartment for over four months; things are really slimy but no rusting anywhere. Ship-2-Shore has formed a very protective barrier under the slime. 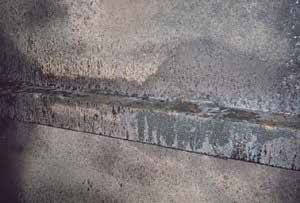 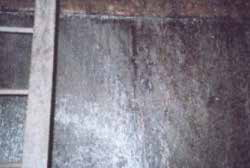 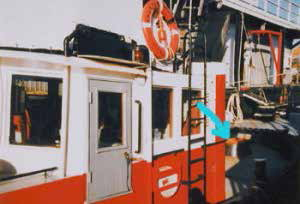 The lazarette, or steering compartment, under the hatch (indicated by the blue arrow) in the back of this SeaSpan tug is subjected to stressed metal (dents), heat and humidity, wet and cold. This is quite an aggressive environment.

The lazarette had been painted in 1990. When I entered in 1994 there was already a very active rust stain coming from behind this angle iron. Without preparation, although the metal was wet, I painted Ship-2-Shore stain off in two spots. 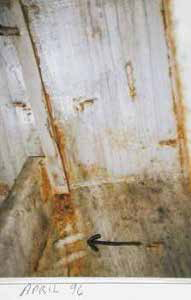 Two years later in 1996 I took the first picture of this series. Nothing crossed the top rub off, a slight stain is visible crossing the lower rub off proving this was very active at the time of INDUSTRIAL application. 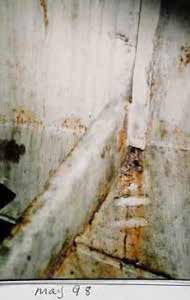 1998 nothing has crossed the top rub off, the stain on the lower rub off has almost faded away, proving it is no longer being fed (the tear of a dying rust cell). 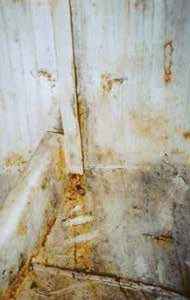 In October of 1999, five and a half years after application, there are no new rust stains. Behind the angle iron there seems to be as much Ship-2- Shore INDUSTRIAL remaining as when it was applied in 1994. This is performance! This is cheap maintenance so simple it's hard to believe. 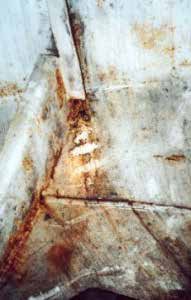 This photo was taken in February 2004. Still nothing has crossed. This is proof that the rusting has been stopped 100% In 10 Years no rust appeared... not bad for one application of Ship-2-Shore. The application took 5 minutes, and no preparation or skill was required. 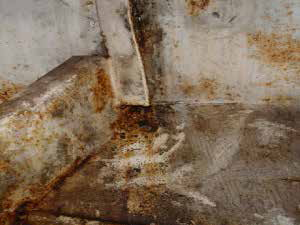 The photo above was taken August 2009. This is why repair yards don't want you using Ship-2-Shore. 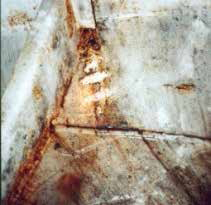 No rusting after 15 years!

For further advice about the range of Thin Film, Industrial Thick Film, Thick Film, Float Coat or PLID Wrap, give us a call on (03) 9587 6022 or drop us a line!
EMAIL US